Moscow Stud Farm was initially designed to breed Orlov Trotter under the auspices of Russian research centres for horse breeding.

The Orlov Trotter is the crown jewel of Russian horse breeding. Created by Count Aleksey Orlov at the end of 18th century and accustomed to the Russian climate, the Orlov Trotter has always been easy to keep and beautiful, with excellent performance and a good pedigree. They have been used as coach horses and for riding and sport.

In 1775, Count Orlov bought several horses in the Morea. He gave most of them to Catherine the Great but kept a few of them for himself, including an Arabian stallion named Smetanka for which he paid 60,000 roubles in paper money.

Orlov’s horse-buying expeditions in the hostile Ottoman Empire were colourful. The Grand Admiral of the defeated Turkish fleet Cezayirli Gazi Hasan Pasha, helped Orlov buy and transport the horses because Orlov had treated Hasan Pasha’s family humanly and returned them to the Ottoman Empire when they had been his prisoners. Catherine the Great was impressed by this story and called Orlov “a knight” in a letter to Voltaire.

Unlike other horses, which were transported by sea, Smetanka was sent to Russia overland via the Balkans with a military escort. For greater safety, the white stallion was smeared with black paint to hide his true value.

Smetanka’s grandson, Bars, is believed to be the forebear of the Orlov Trotters, although experts emphasise that even Bars was not the final product of the breeding efforts. In 1875, Russia solemnly celebrated the 100th anniversary of the Orlov Trotter, linked to the date when Smetanka was brought to Russia. Smetanka was probably the most famous horse in the entire history of the national stud. His skeleton, with 19 ribs on each side, was first kept at the Orlov’s’ estate in Ostrov, and in 1812 it was moved to the Khrenovskoy Stud Farm. 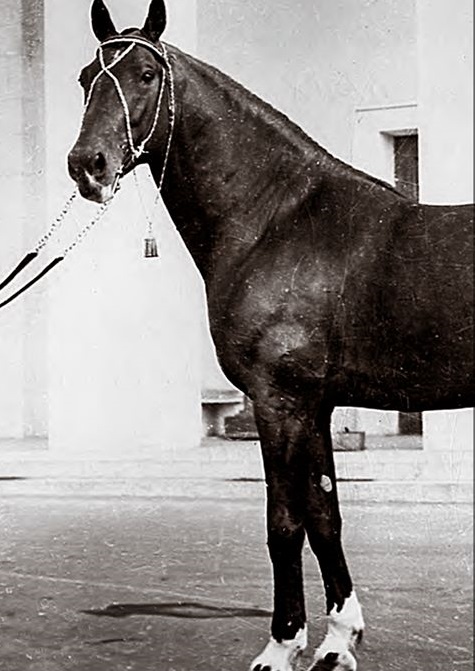 A valuable portion of the Orlov gene pool is concentrated at the Moscow Stud Farm, which bred Kvadrat and Pion, two famous stallions who left their mark on the entire breed.

Kvadrat (2:08.1, bay, 1946) was the Stud’s main sire for 25 years. An outstanding phenotype producer, Kvadrat was used extensively to artificially inseminate mares from a number of studs. All told, he sired over 600 offspring.

Kvadrat had a distinguished racing career that included winning all the traditional prizes at three and four years old and setting two All-Union records for Orlov Trotters. At the age of four, Kvadrat ran 3,200 metres in just 4:23, a record that remained unbroken for 36 years. The venerable racehorse went on to live almost 30 years.

Kvadrat was a prepotent stallion whose offspring inherited his vivid Orlov draft build and regular exterior. He sired nine stallions, only three of which were born outside the Moscow Stud Farm. The best of his sons were the full brothers Bokal and Bouquet, who were foaled at the Stud Farm and carried on Proliv’s line for several generations. Kvadrat sired 19 top-ranking foals, trotters of 2:10 and better among them, including the sire Bouquet 2:03.2. 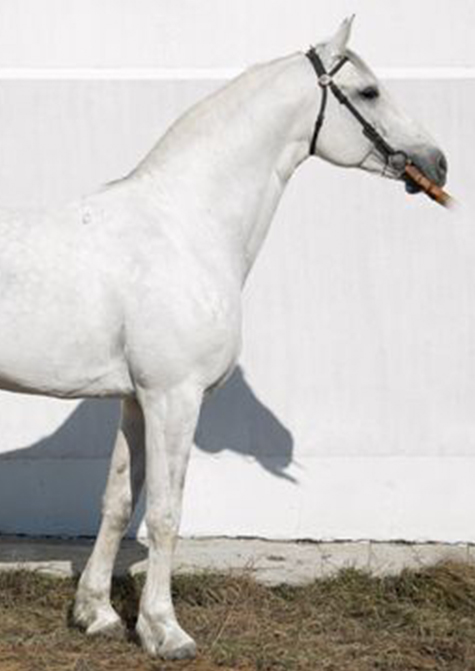 Pion had a phenomenal racing career and showed amazing speed at the Kharkov hippodrome. He was undefeated in his 2YO season. At the age of three, he scored 2:10. By four years old, he had improved to 2:06.2. In the same year, 1970, he won the Bars Prize at the Central Moscow Hippodrome, hitting the distance at 2:16.7. At the Kharkov hippodrome, he took the traditional Bars Prize and the Great Ukrainian Prize. In Odessa, he set a 2:00.1 record in 1974 at the age of eight. Pion was the All-Union winner and all-around champion of his breed. His record of 4:13.5 in the 3,200-metre is yet to be broken. Pion was a repeat champion at the Exhibition of Achievements of National Economy (VDNKh) and won international prizes at the Central Moscow Hippodrome, where he competed with best Russian and Standardbred trotters.

In terms of offspring quality, Pion was the best Orlov stallion in the history of the breed. Of his tested offspring, 128 stallions qualified at 2:10 or better, including 19 at 2:05. Pion’s foals won the Great Triennial Prize seven times at the Central Moscow Hippodrome; they took the Bars Prize five times and the Pion Prize eight times; ten of them are all-around breed record holders, and 22 of his stallions were selected to stand at stud. Pion has his own line, and several generations of this line were foaled by Prospect from the Khrenovskoy Stud and Fortunato, Blokpost, and Pompei, all foaled at the Moscow Stud Farm. In order to play down Pion’s shortness and plain exterior, he was given only the all-around best mares, resulting in fast offspring who are true to type with excellent exteriors.

Orlov Trotter brood mares tend to be tall, with a distinctive draft build and a broad body.

The uniformity of the dam stock in the Moscow Stud Farm’s Orlov programme has been admired for many years. The Farm’s brood mares have the highest marks for breed type and exterior (3.90 points) among all studs that breed the Orlov Trotter. The brood mares excel with vivid character, harmony, attractive stature and lean conformation.

While colour is not a key selection trait for Orlovs, the breed is famous for its grey and dappled grey coats. For this reason, approximately 60% of the stock is used to maintain those colours. The Moscow Stud Farm’s dam stock shows all four colours typical for the Orlov, with grey predominating (59.5%), followed by bay (27%), black (8.1%) and chestnut (5.4%).

Fertility is extremely important, both biologically and economically, and is greatly influenced by the environment. In the 1990s, the Stud’s fertility performance was high (86.1% foaling), with very similar performance across mares of various breeds. In recent years, however, the fertility index at the Moscow Stud Farm has decreased, with the foaling level at 63.78% across the Stud and 76.8% for the Orlovs.

Five mare families are maintained at the Moscow Stud Farm. The largest (17 horses) is the 0468 Kadetka (Ludi Fert – Koldunia) family, which ranks second in the breed in terms of the number of mares. Currently the following mares of this family are used at the Stud Farm: Kanitel 2:02.2 the family’s top dam and one of the fastest mares in the breed, with expert exterior marks of 4.25 points; Kapa 2:07.5 who was a success at the Ramenskoye Hippodrome, and the swift Kvota 2:09.8 and Kopot 2:09.0. Mares in this family are very fast. Their offspring are also very fast, with clear breed type and high match capability. The mares are productive and long-lived.

The 07680 Tarpanka family, which for many years was a closed bloodline within the Stud, has increased in number and expanded to other stud farms. With seven mares, this family is the second largest at the Moscow Stud Farm and traces its bloodline to 8199a Barvikha (2:10.1) who has American Standardbred blood. While these mares have very fast offspring, the foals often deviate from the Orlov Trotter type and lose the breed’s conformational beauty. Earlier, sires from the family included Fortunato 2:04.7, Fagot 2:02.3, and Fant 2:00.9. There is one current 2:10 stallion descended from the family – Bitok 2:09.5.

The third largest family of dam stock is the 221 Govorushka family (six horses), which is predominantly grey in colour. In this family, it is mainly the stallions who are fast. For the most part, the current dams of the family are true to type and uniform with good conformation. They include the gorgeous record holder Gviana 2:03.2 and the Equiros 2001 Exhibition champion Girlanda 2:29.2, mother of Gayduk (by Kapron), the 2003 champion by type and conformation at the Central Moscow Hippodrome. Apart from Gayduk, this family’s current offspring is for the most part average. A valuable branch of the 221 Govorushka family goes through the mare Syrla-Chashme (Govorushka – Krepysh) and includes the sires Stazher 2:04.8 and Sinap 2:02.5. This branch is no longer bred at the Moscow Stud Farm because of a lack of quality dams, but it continues to be bred at the Kalganovsky Stud (formerly Zvezdochka Stud).

The 425 Kartinka family has five usable mares at the moment. The most successful dams are Bukovina 2:06.1, who foaled the stallion Bezuprechny 2:09.8 by Poklon, and Bystrota, who foaled the 2:10 class trotter Boykot 2:08.0.

Several years ago, the 410 Kaleria family was one of the largest families at the Moscow Stud Farm. The Farm currently has two mares from this family, the nineteen-year-old Bretan 2:07.8 the breed’s top dam, and the young Bobrovka 2:19.1, sired by Krokus out of Buksa. This family of mares usually foals extremely fast stallions. Today, few horses remain in the 410 Kaleria family.