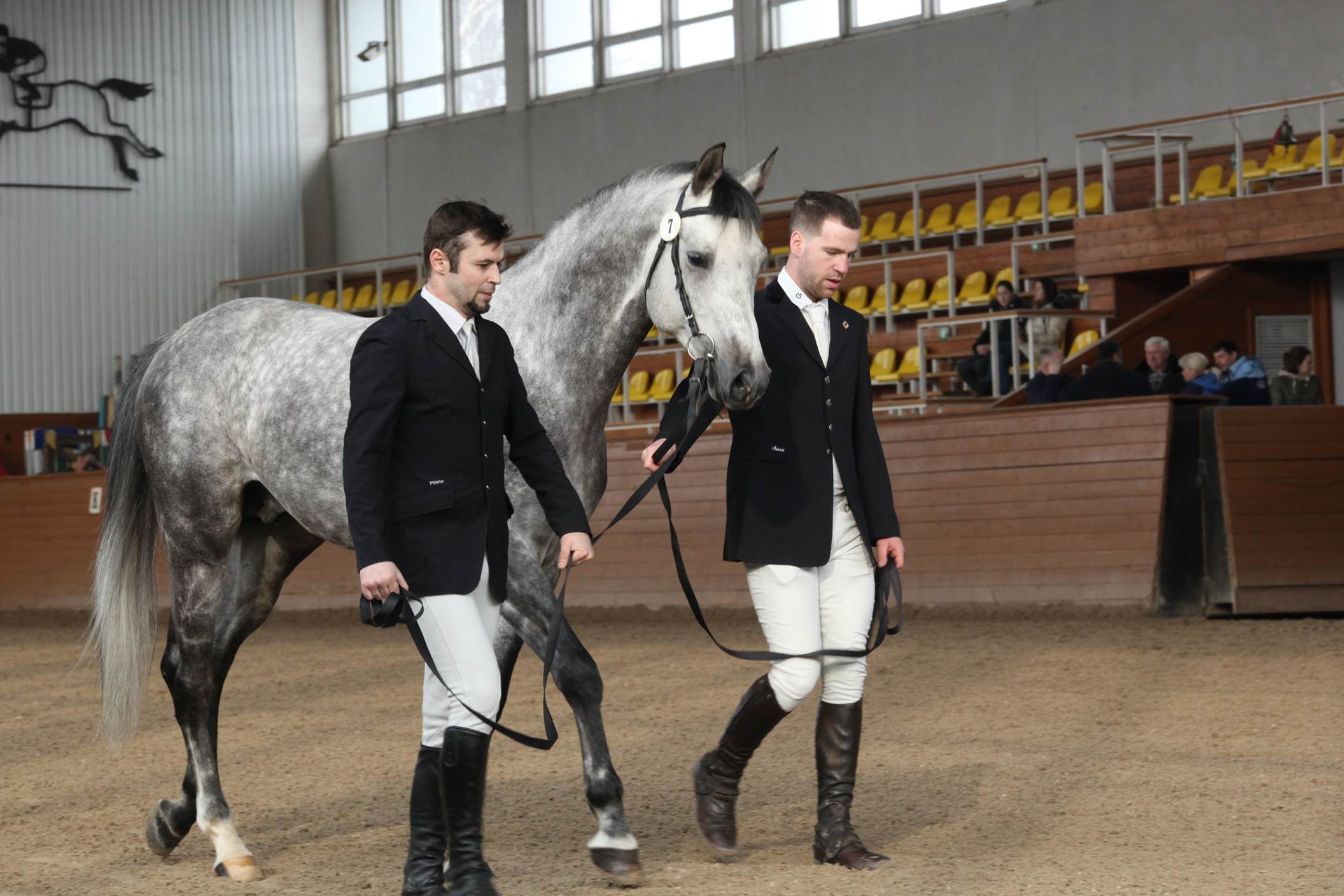 The Trakehner’s history is interwoven with the history of relations between Prussia (Germany) and Russia (the Soviet Union). The foundations for the breed were laid by the Teutonic Order knights who conquered the lands of what would become Eastern Prussia in the 13th century. They started interbreeding the sturdy mares from Samogitia with graceful stallions from Asia. By 1400, the Teutonic Order owned 30 stud farms with 14,000 horses. The knights focused on breeding horses for military purposes that were equally suitable for riding and harnessing.

However, when Frederick William I of Prussia came to the throne, there were only 1,310 excellent Prussian horses at the royal stud farms. By 1717, the stud farms were transferred to the provinces of East Prussia, which had been devastated by plague and were not bringing in any income. The towns of Ragnit, Schreidlauken, Budupenen, Guddin, Easterburg and Spermet in this region laid the foundations for Prussian horse breeding.

In 1732, Frederick William I established the Royal Stud Farm in the East Prussian town of Trakehnen. It was a massive project that required painstaking efforts to drain the marshland, level the fields and pastures, and build special equestrian facilities.

Prussia’s breeding programme bred mares transported from Asia with stallions of various breeds, including English, Arabian, Spanish and even Russian stallions. Earl Lindenau, who was appointed Ober-Stallmeister in 1787, finalised the development of Trakehner breeding strategy and targets. He conducted a strict culling of sires and dams and ordered that the remaining dams only be mated with top-range pureblood English and Arabian stallions. Earl Lindenau’s goal for the Royal Stud Farm was no less than an overall improvement in the entire Prussian horse breeding programme.

In 1787, the Trakehner breed was given a brand mark of double moose antlers with seven points. Horses were branded on the right thigh.

In the 19th century, the Trakehnen Royal Stud Farm had such an important influence on East Prussian horse breeding that horses bred at this stud farm were called Eastern Prussian horses of Trakehnen origin. After approximately 1888, all horses from Trakehnen were branded with double moose antlers on the left thigh.

The Royal Stud Farm supplied horses to the royal stables and the cavalry. Trakehners were famous for their speed – they could cover the distance between Berlin and Potsdam (around 40 km) in two hours, half an hour faster than English, Mecklenburg, or Russian horses.

In the 18th century, Trakehners were used by royal families when travelling, and in the 19th century they were used as light riding horses by cavalry officers. Most of the East Prussian horses (30,000 dams) produced cavalry horses that were used on peasant farms in peacetime.

After its defeat in World War I, Germany lost the right to maintain a cavalry and horse breeders faced the new challenge of breeding horses for agricultural use. At the same time, they bred high-quality sport horses. As a result, the new sport breed posted excellent results at the 1936 Olympics in Berlin and won the first and second prizes in dressage.

World War II nearly destroyed the breed. Most of the horses died during the bombing of Königsberg and Trakehnen. Soviet officers took surviving Trakehners as trophies. Only 28 mares and 60 foals from the Trakehnen Stud Farm were evacuated to West Germany.

In 1945, horses from the Trakehnen Stud Farm were transported to the Kirov Stud Farm, which still breeds the Trakehner. The horses were exhausted and sick when they arrived in Kirov, but most of them recovered through the dedicated efforts of the stud staff.

In 1948, the Union of Trakehner Breeders and Friends (Trakehner Verband) was established in Germany. It retained the right to brand horses with the double moose antlers on the left thigh.

In the late 1960s, the director of the All-Union Research Institute of Horse Breeding, Professor Yuri Barmintsev, insisted on separating the Trakehner Studbook into pureblood and non-pureblood sections. This move helped preserve the purity of the Russian Trakehners and resulted in international recognition of the Russian Studbook. The first volume of the State Trakehner Studbook was published in 1971.

The Trakehner breed suffered again in 1991, when stock was scattered across former Soviet republics after collapse of the USSR and contacts with foreign horse breeders were interrupted. The All-Russian Research Institute of Horse Breeding and its Trakehner Breeding Association, established in 1989, began reviving and developing international cooperation with Trakehner breeders and supporters from Belarus, Ukraine, Estonia, and Lithuania. In 1996, the Trakehner Stud Farm Association was transformed into the Russian Trakehner Breeding Association.

In 1997, the Russian Trakehner Breeding Association became a member of the international community of Trakehner breeders and supporters under the auspices of the German Trakehnen Union and received the right to brand Russian Trakehners with the seven-point double antlers and the letter “K”.

Trakehners foaled in Russia have had spectacular careers in the Olympic equestrian sports, both in Russia and abroad. German experts acknowledge these horses’ achievements, and Russian Trakehners are said to be even more popular than their German cousins.

In the 21st century, the name “Russian Trakehner” became a generally accepted term. Expert horse breeders who know the breed and its history understand that the term reflects not only that these horses are foaled in Russia, but also that their pedigree can be traced back to horses bred at the Trakehnen Stud Farm.

Trakehners at Moscow Stud Farm No. 1

Trakehners were brought to Moscow Stud Farm No. 1 in 1993 from the breeding farm at the Pokrov Biologics Plant in Vladimir region, east of Moscow. The first group of Trakehners included 19 mares of different ages, six of them already in foal. Despite the fact that the horses were emaciated due to poor feeding at the breeding farm, all six dams gave birth to healthy foals.

All the youngsters were sold for a profit at the age of 1.5–2 years: Grifon, Pryzhok and Ottava went to a private horse owner in England; Pevets was sold to Germany; Plis and Ofelia were sold domestically. Two young mares born in 1991, Vestfalia (Ferro Second – Vlaga) and Estetika (Topot ‑ Everia), were sold as well.

In 1994, the Trakehner dams were recovering from malnutrition and were not mated.

In 1995, Moscow Stud Farm rented the young bay Trakehner stallion Zorro 114 from the Ryazansky Stud for the mating season. Zorro 114 was sired by Rafael out of the purebred saddle horse Zaviaz. 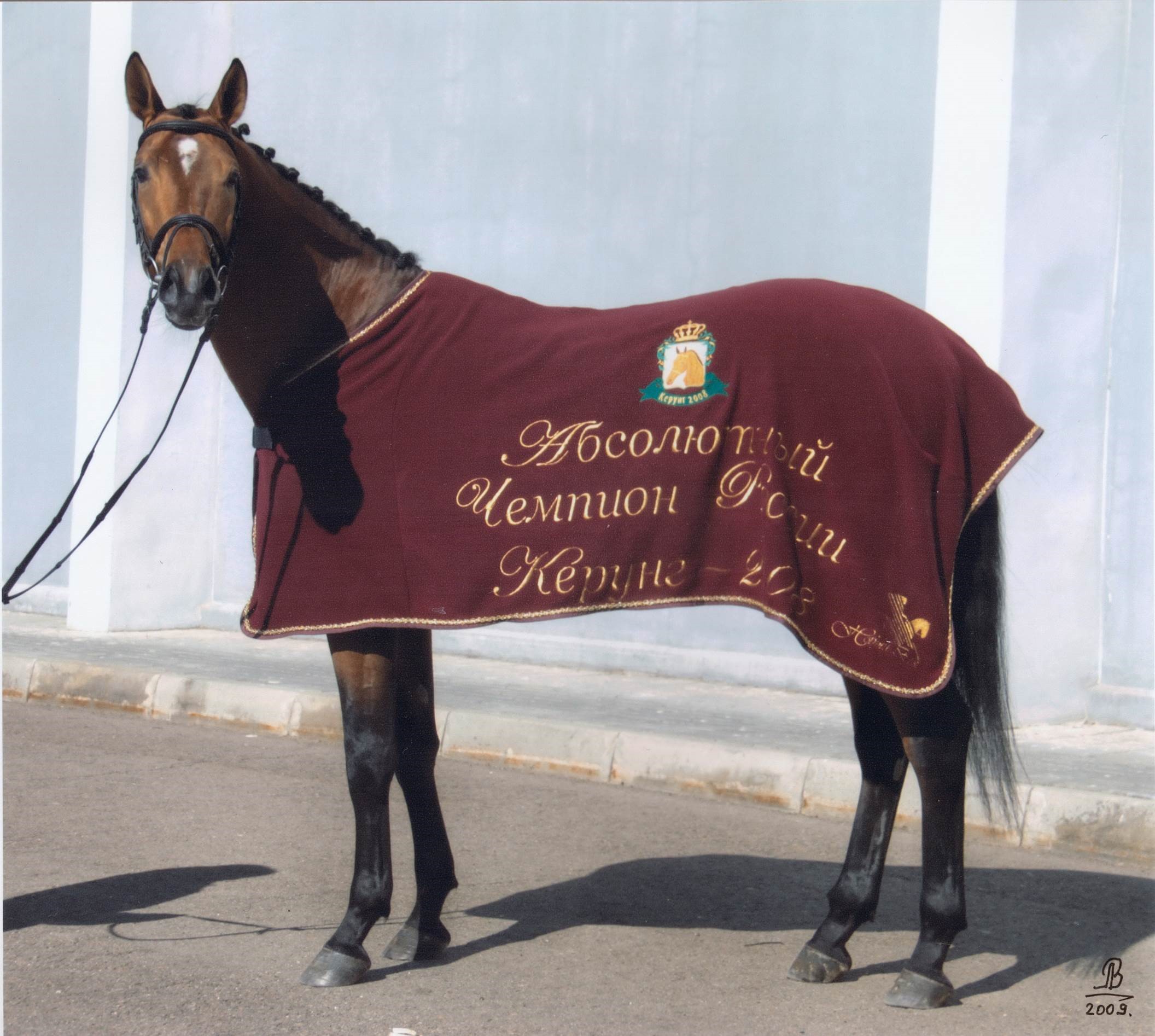 Zorro sired nine foals in total, all good jumpers. The mare Groza (1996, Zorro – Gviana) was sold to the international class jumping master Yevgeny Suslin and showed well in jumping competitions in Moscow. The rest of Zorro’s offspring were sold in Russia and Belarus. In the summer of 1995, Zorro returned to Ryazan.

Based on the performance of his get at Moscow Stud Farm, Zorro was highly valued for his offspring quality and was in great demand to stand at stud. Moscow Stud Farm was unable to contract Zorro for another season because of his popularity.

In 1996-1999, the Stud Farm used two stallions sired by Torino – Otello and Pakt – for breeding, as well as Korsas, sired by Homeras. In the early 2000s, Moscow Stud Farm’s main Trakehner sire was Papuas, grandson of Greshnik.

In 2004, in addition to Papuas, the purebred saddle stallions Ikar (1988, Akar – Izotonia) and Prikup (Korsas – Povestka), foaled at Moscow Stud Farm, were used to improve the breed.

Prikup is still used for mating. His first gets included the mares Khrupka (out of Khlorofilla) and Opuntsiya (out of Opushka), both of which were selected to replace horses sold from the stud.

Zorro’s daughter Groza took the First Prize at the Moscow Cup in show jumping (150 cm) under the saddle of Yevgeny Suslin. Stallion Khazar (1996) is a winner of the Kuban First Prize.

Pakt sired good broodmares - Opushka (out of Okhta) and Pripyat (out of Peregrina).

In 2000, Ikar sired black Pikur, a champion of 2002 jumping competition and ring-show competition for two-years-old at the All-Russian Reasearch Instiutute of Horse Breeding. Today, Pikur works at the Moscow Stud Farm’s youth equestrian school. In the autumn of 2009, the black and tan mare Khitryuga (2003, out of Khorza) won the Second Prize in indurance riding (30 km) at the Ruzsky Rally competition.

The bay stallion Korsas sired Prikup (out of Povestka), the overall 2002 champion among 3YO sport horses at the All-Russian Reasearch Instiutute of Horse Breeding. The same year, Prikup was named the breed champion at Equiros and was awarded the gold medal and a rug.

The Moscow Stud Farm’s specialists are committed to preserving the Trakehner exterior and physical breed traits. A good Trakehner has to have a finely chiselled and slightly lean head with elegant lines and big clever eyes, straight or concave profile and broad forehead. It is said that the Trakehner’s head is perfect. These horses have to have a wedge-shaped, long and light neck, broad and deep chest, robust body, and long shoulders. High, muscular withers and a generally well-developed muscular system are another Trakehner breed trait, as well as a slightly stretched body and oval croup, correctly set legs with pronounced joints and large hoofs with dense horn. Trakehners are usually tall and large. The average height for a stallion is 166 cm, but some stallions may reach 174 cm. The average height for a mare is about 164 cm. 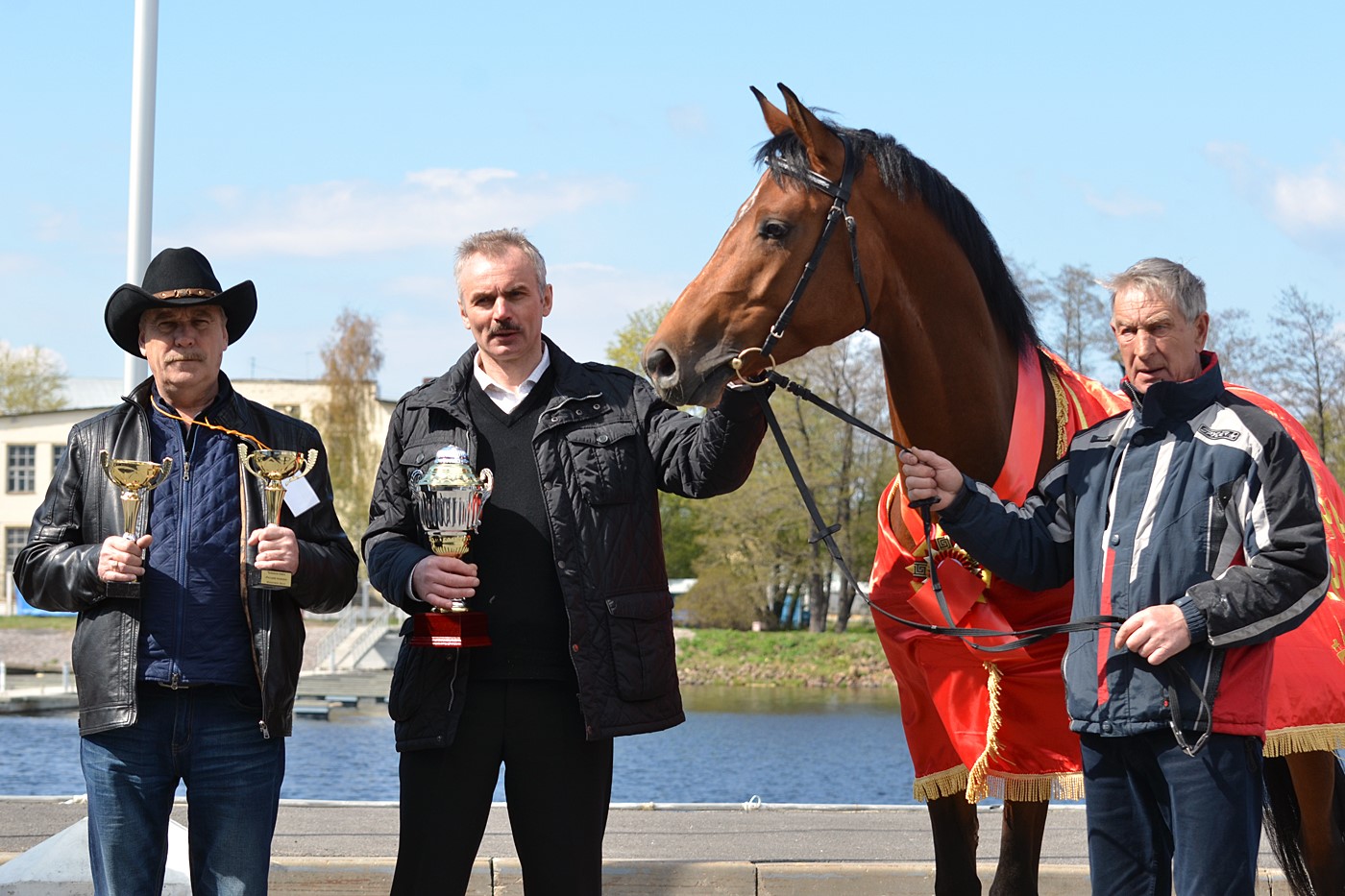 Trakehners usually have a light step, especially under saddle, and a very light trot that covers a lot of ground. Their movements are smooth and they excel at jumping. Trakehners have a well-balanced temper; they are easy to train and may be used in almost any equestrian sport. These horses are very sturdy, hardworking, and courageous. They are equally suitable for experienced riders and beginners. Trakehners are excellent riding horses and harness horses. They may be used for a range of purposes, from agriculture to equine-assisted therapy.

All Trakehners from Moscow Stud Farm No. 1 meet the breed standard of Russian Trakehner. Over the lifetime of its Trakehner programme, the Stud Farm, which has a relatively small dam stock, has sold over 150 horses of this breed.